The pandemic has reminded us, perhaps more than ever before, about how special travel is – exploring new places, meeting new people, and that includes dining with others during these adventures. This special exhibition explores travel dining by airplane, train, steam ship, carferry, and even by space ship. Visitors may become nostalgic for the now defunct airlines Pan Am Airlines when they view dinnerware, menus, and even a vintage toy airplane.  What was it like to have tea on the Queen Mary while reclining on a deck chair? Remember the dining cars on the Streamliner trains?  Re-imagine enjoying the journey with your family on the carferry across Lake Michigan while aboard  the S.S. Badger. Visualize Captain Picard having tea on the Star Ship Enterprise… 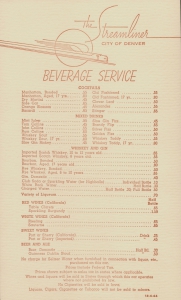 “Railroads recognized very early that dining was a key way to distinguish themselves from competitors. Passengers benefited from each railroad’s effort to offer the best food, best service and best dining environment. Even the china became a mark of distinction. Railroads often used unique china patterns to brand the railroad and their unique passenger routes.  Union Pacific featured different china patterns for each of its premier routes and even had special china for children on certain trains.

“Union Pacific’s famed ‘City’ trains, such as the City of Los Angeles or City of Denver, all used a distinctive Streamliner pattern featuring a winged locomotive. This pattern featured gold pin striping and a winged train emblem that ranged in color from rust-red to green or brown. Introduced in 1936, this distinctive pattern is still in use on Union Pacific’s private passenger fleet.

“Authentic railroad china is typically marked with the name of the china maker and some combination of the train name, china pattern and railroad name, logo or initials. The distinctive Streamliner designed china was manufactured by several different makers, including Homer Laughlin, Syracuse China, Sterling and Trenton. This pattern was not always back stamped, or marked on the back with the maker, but when it was, it included the name of Union Pacific R.R.

“Railroads carried thousands of pieces of china in each passenger train, from egg cups to butter pat plates to demitasse cups and saucers, in addition to the standard plates, bowls, cups and platters.” 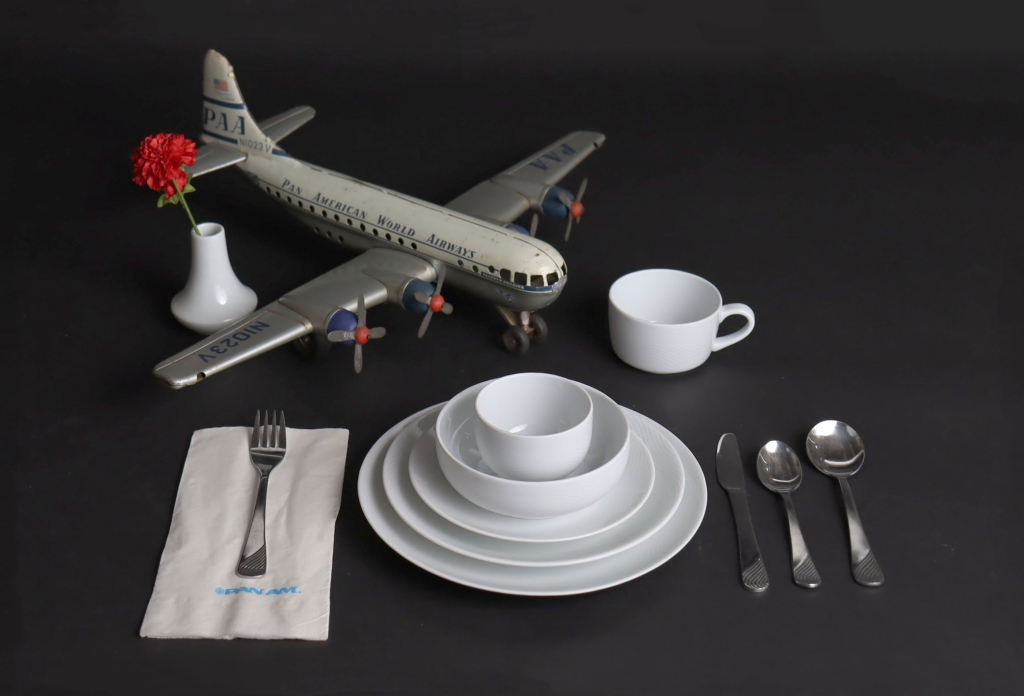 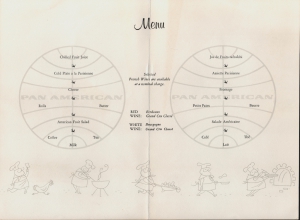 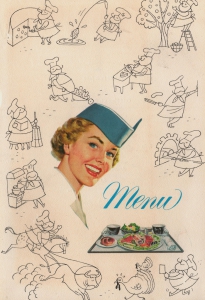 Pan American World Airways was founded on October 27, 1927, as America’s first international airline. More about Pan Am’s fascinating history can be found at the website everythingPanAm.com which is home to the Virtual Pan Am Museum.

In 1986, Pan Am introduced what would become its last china and flatware pattern. The all white patterned china, manufactured by Bauscher Weiden in Bavaria, Germany, featured a wave design around the border of all plates. The service pattern was called White Wave. An individual bud vase was part of this fresh set of airline china. Other pieces included a dinner plate, salad and dessert plate, bread plate, bowl, coffee cup and saucer and a condiment cup.

The stainless steel flatware, also with the Wave pattern, was manufactured by Northland Stainless in Mexico.

The Pan American Airlines menu is from their American Clipper fleet and features the menu written in both English and French.  The selection included wine, chilled fruit juice, cheese, rolls, butter, and more. The menu is not dated. It was an IMoDD Museum Purchase, acc. no. 2022.19.

This dinnerware was used in First Class and Business Class catering on Pan Am flights until 1991, when the company ceased operations. 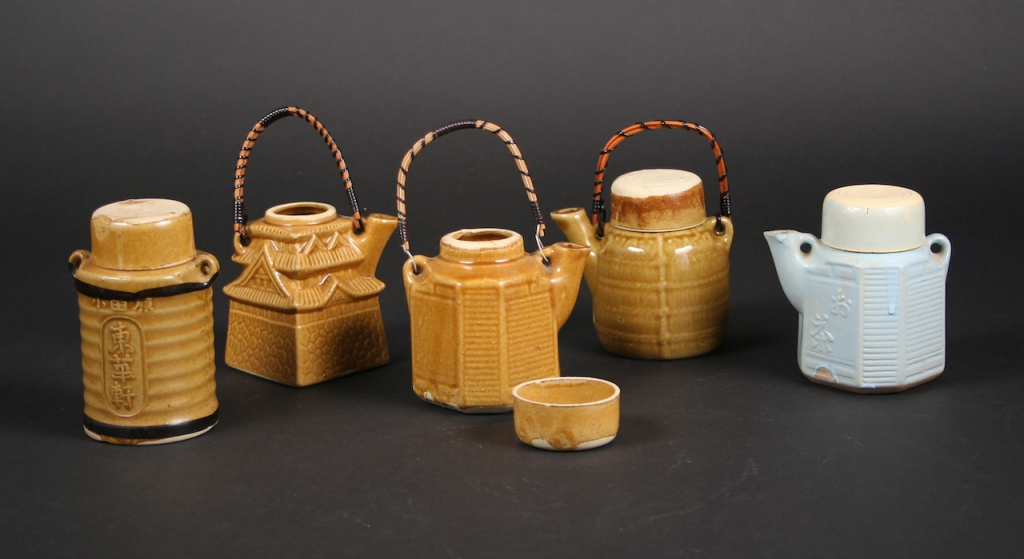 Sure to be as popular among museum exhibit visitors as train riders in Japan in the mid-20th century, are the small ceramic sometimes-pagoda-shaped disposable trainware teapots with lids that serve as cups (in Japanese, kisha dobin).  According to Louise Allison Cort, Curator for Ceramics at the Freer Gallery of Art and the Sackler Gallery at the Smithsonian Institution in Washington, D.C., these small train teapots were an important product from the late nineteenth century to the mid-twentieth century.  They were sold from trays on train station platforms.  The first were produced in Shigaraki. The group on display are of later origin (mid-20th century) and were not individually handmade, but rather produced by slipcasting in molds. Plastic versions became popular after these ceramic ones, as one might have guessed. A plastic trainware teapot would be a welcome addition to the IMoDD permanent collection. 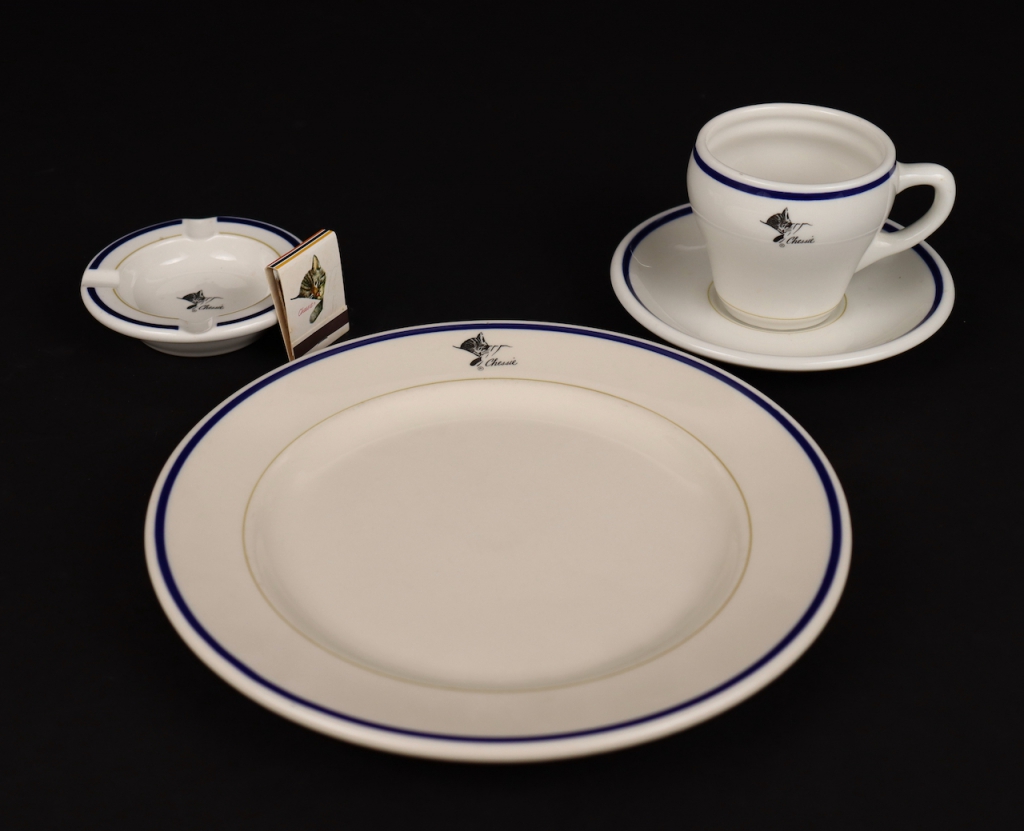 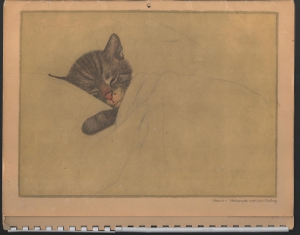 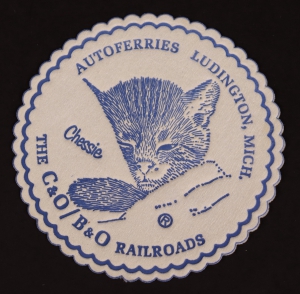 Chesapeake and Ohio railroad china was manufactured by Syracuse China in Syracuse, New York.  The logo featured Chessie the kitten, napping. A 1963 Chesapeake & Ohio calendar in the IMoDD archives shows the company celebrating the 30th anniversary of Chessie serving as the “warming symbol of friendly services on the Chesapeake and Ohio Railway,” which confirms that the ®Chessie has been in use since 1933. The calendar continued the story that “Almost from the day…that C&O adopted the now-famous etching by Viennese artist G. Gruenwald as its distinctive mark of corporate good will, Chessie has achieved recognition the world around. That the affection held by her vast fandom is lasting and genuine is evidenced in scores of letters from parents. As children, they knew the delight of having pin-up pictures of Chessie and are now requesting prints for a new generation of youngsters,” one of whom was the curator of this exhibition.

This top-marked dinnerware was also used on the Chesapeake & Ohio car ferries, one of which, the S.S. Badger still transports people, cars and trucks across Lake Michigan from Ludington, Michigan to Manitowoc, Wisconsin. The paper coaster (illustrated, but not included in the exhibition) is from the Ludington car ferry. 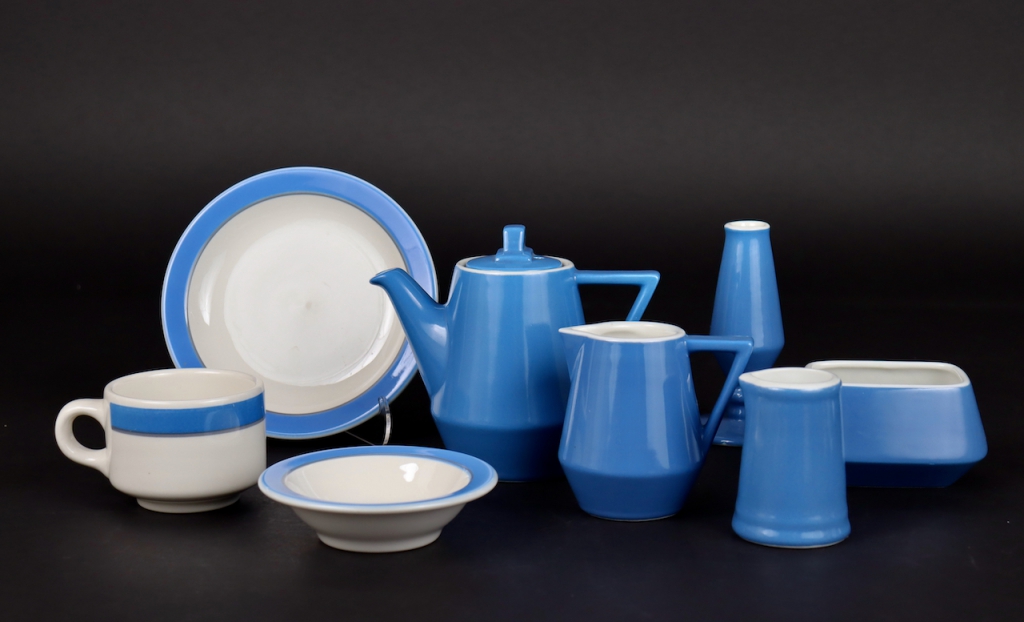 The easily recognizable unique blue Amtrak railroad dinnerware in the National pattern was manufactured by Hall China and the Homer Laughlin China Co. circa 1973-1980. Apparently, it was slightly modified from the first Amtrak service that Walker China manufactured. Hall is responsible for the manufacture of the bud vase, a teapot, a coffeepot, a creamer with a lid, and a squared open sugar and pitcher. 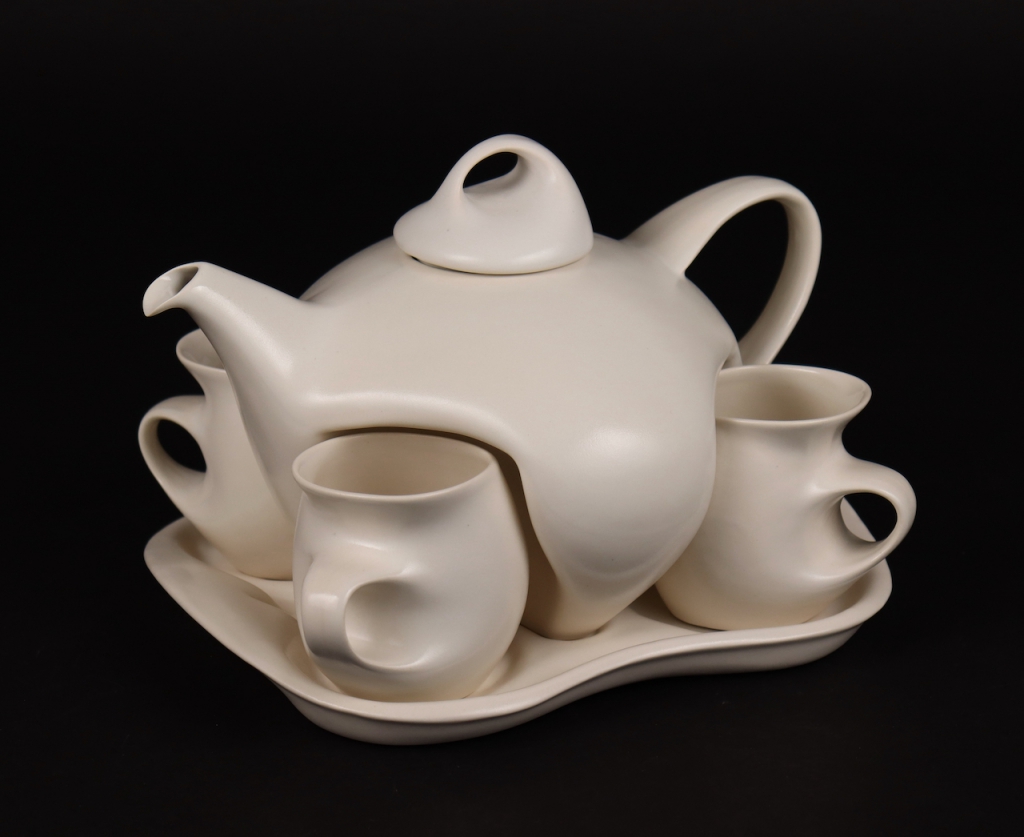 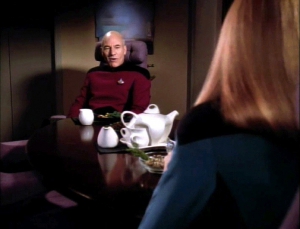 While this exhibition features dining implements used while traveling via train, plane, cruise ship and even camping, dining while traveling in outer space is also explored. This Saenger Porcelain teapot and tray with four nesting cups, a.k.a. “Captain Picard’s Tea Set,” was first designed by Peter Saenger in 1980.  Captain Picard and his crew can be seen using this tea set on episodes of the TV program Star Trek:  The Next Generation. This set was created in 2022. It also comes in black. It is a timeless design, so it is no wonder that it was chosen to represent what dining would look like in late 24th century on the Starship Enterprise! 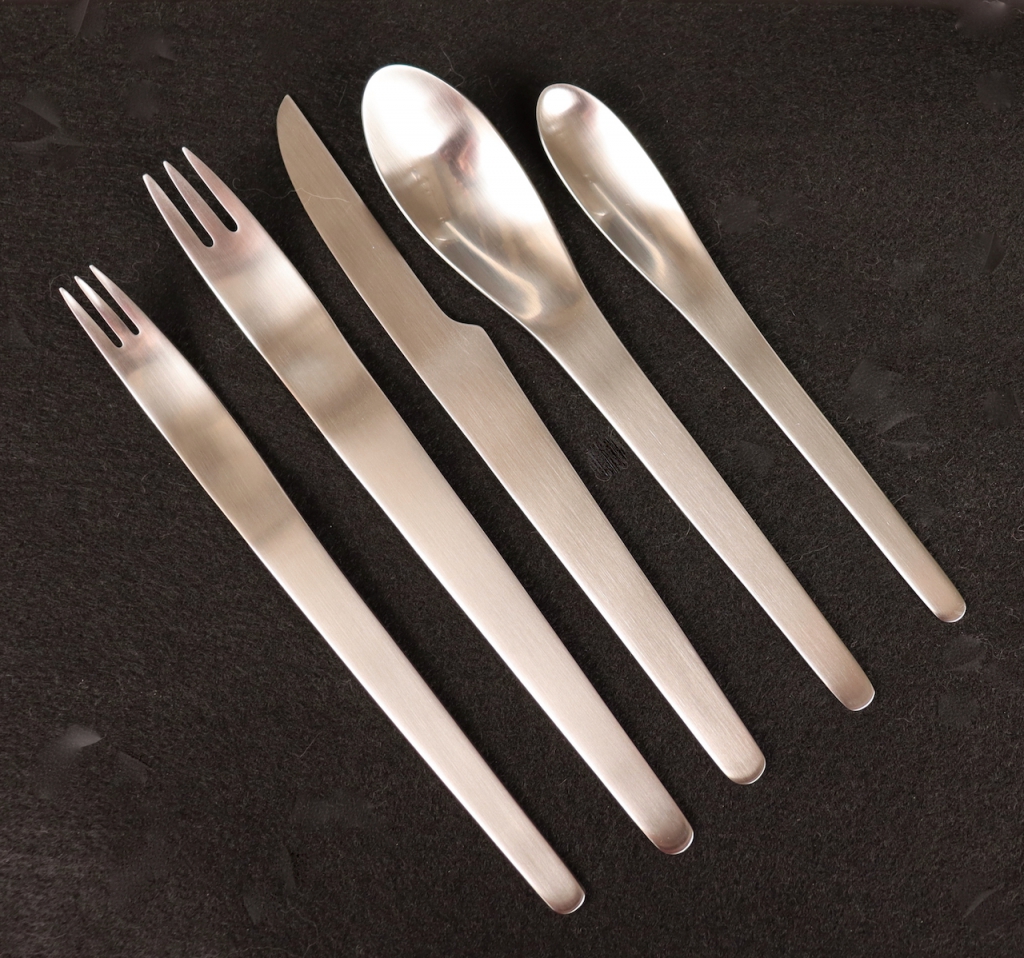 Georg Jensen 5-piece stainless steel flatware, 1957, designed by Arne Jacobsen, that can be seen in the movie 2001:  A Space Odyssey
stainless steel
IMoDD 2022.18 Gift of Matthew Whalen and Rick Sanders

The Georg Jensen stainless steel flatware designed by Danish architect and furniture designer Arne Jacobsen in 1957 was so modern yet futuristic in its timeless design that it fit perfectly into the outer space aura of the movie 2001: A Space Odyssey, as well as Star Trek: The Next Generation.  It has been perfectly described at the Georg Jensen website: “The absolute minimalism and simplicity of this striking stainless steel cutlery set has made it a truly iconic piece of Scandinavian mid century design.” 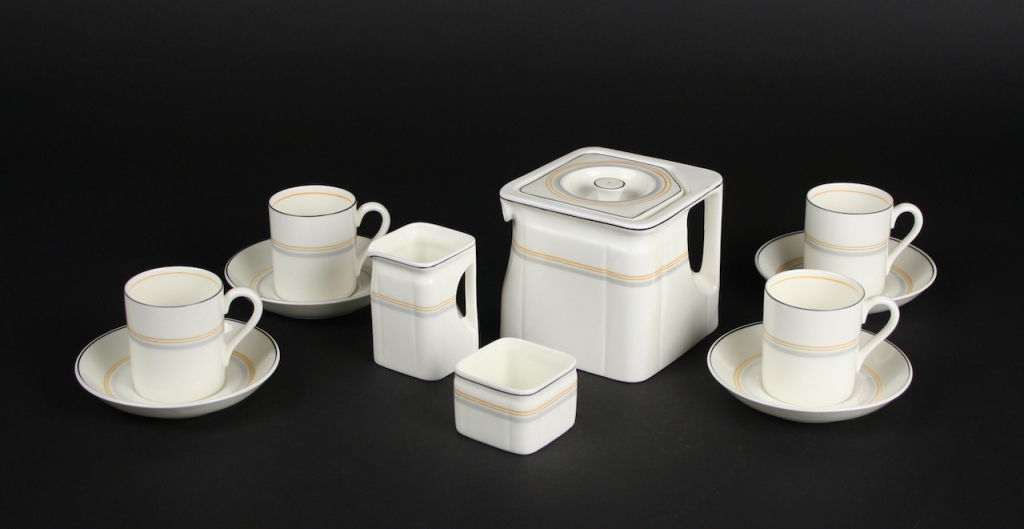 The RMS Queen Mary and the Cubed Tea Service

This rare bone china tea service, manufactured in England by Foley China, was part of the experience of dining on the RMS Queen Mary, part of the Cunard Line, which sailed primarily on the North Atlantic Ocean from 1936 to 1967. The set consisted of a small teapot with a lid, demitasse cups and saucers, creamer, and sugar. It is said that the Queen Mary and her sister ship, the Queen Elizabeth, dominated the transatlantic passenger transportation market until the dawn of the jet age in the late 1950s. The Queen Mary was retired in 1967 and is now permanently moored at the port of Long Beach, California.

Robert Crawford Johnson designed this cube teapot and registered the design in 1917. The teapot was dripless and poured easily. The cube shapes were chosen for use on the ships because of economies in stowage and reduction in breakages according to the written records of the day.  The cubed shape eliminated fragile spouts and handles.  A number of English companies supplied the roughly 30,000 pieces that comprised the china table service on board. 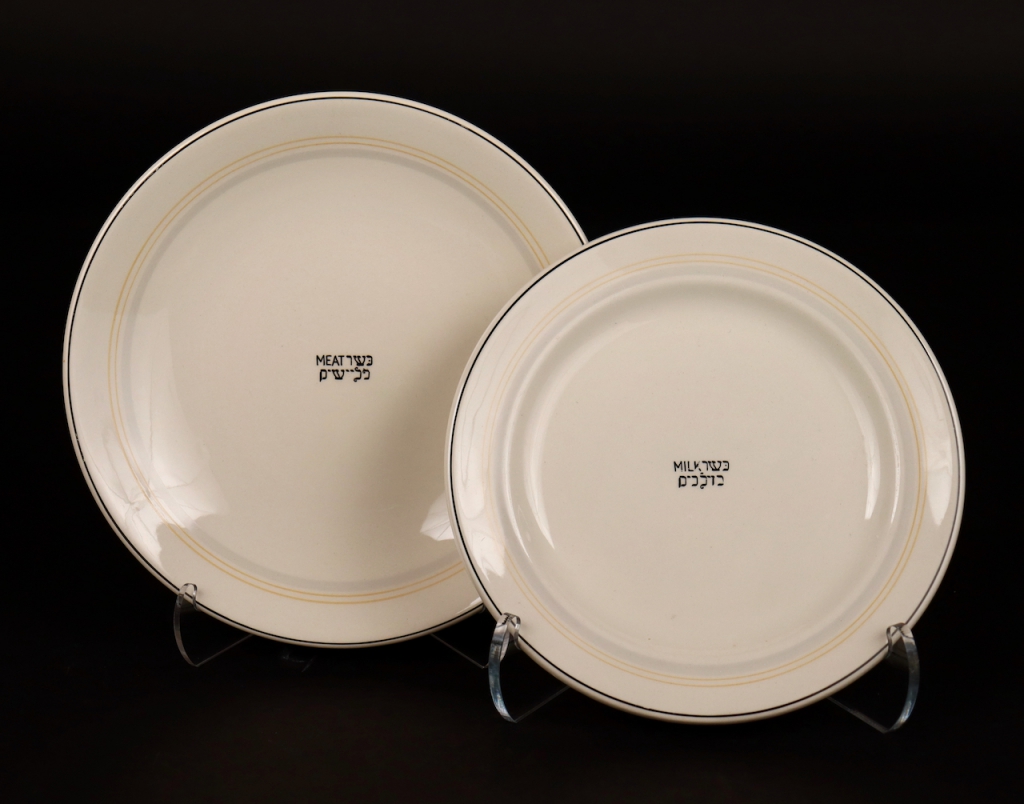 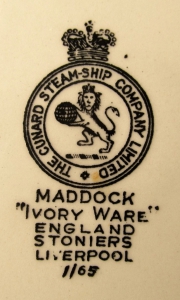 Kosher “milk” and “meat” plates, manufactured for use on the RMS Queen Mary

These two vitrified china Kosher “milk” (in Hebrew as well as English) and “meat” (also in Hebrew as well as English) plates, manufactured by John Maddock & Sons. Ltd, Stonier’s, Liverpool, for the RMS Queen Mary Cunard Steamship Company, dating from 1965 and 1963 respectively, were part of the kosher catering service offered to its passengers aboard ship.  One can still get kosher meals on board the Cunard line, by ordering well in advance of the cruise. The Cunard Line also offered Kosher cutlery marked “milk” and “meat,” and of course offered Kosher menus.

The Orikaso flat pack polypropylene camping dinnerware was designed by Jay Cousins, circa 2006.  These sets, which came to their new owner in a flat pack with instructions on how to construct the set were offered in blue, yellow, red and lime green.  The polypropylene could easily be washed and reused and was convenient to store flat in your backpack for hiking or biking.  Some sets like this one were constructed by somewhat complicated origami concepts that only an engineer or puzzle master might enjoy, while later versions involved convenient, if unsightly snaps.